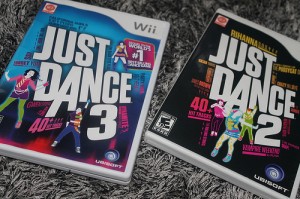 When Wii came out in 2006 gamers were given the impression most games would involve considerable activity.

Although a slew of fitness games came out for the Wii during its peak and later for the Xbox 360 Kinect, most fell short of expectations. Although software that tracks your movements sounded good on paper, implementation often left something to be desired.

What this new approach did right is it gave working out entertainment value and interactivity. With so many forms of amusing distractions out there that lock you onto the couch, owning games that make you sweat provides a counterbalance.

Naturally those looking for an enhanced workout gravitate towards titles like EA Sport Active, Wii Fit Plus, Your Shape Fitness Evolved, and Zumba Fitness.

In the process dance titles that offer a solid cardio workout like the Just Dance and DDR are often overlooked. Although their primary focus is merely fun, sometimes that’s the best motivator there is.

Just Dance was first released for the Wii in 2009. Due to its astronomical popularity publisher UBI Soft has consistently been pumping out sequels and spinoffs. Each major release boasts 40 plus new tracks so it makes sense that it has continued to fly off the shelves.

Like with any Wii game you can cheat the system and play as lazily as possible while still achieving high scores. So you’ll need to be self-motivated to get a good workout from Just Dance. I imagine this isn’t the case with the Kinect version, since it tracks the position of your entire body, although I haven’t tested it myself.

Starting with Just Dance 2, “just sweat” mode was added. It allows players to measure the energy they expend as well as set fitness objectives to be met during their dance sessions.

While Just Dance doesn’t offer sophisticated fitness components you’d expect from an exergame, the fun factor, choreography, stunning visuals and great music more than make up for it.

There are reports online of people losing substantial weight purely with Just Dance so clearly features like weight tracking, calendar features, etc. aren’t as significant as motivators as we’ve been lead to believe. It’s way more important that the software is fun, intuitive and free of technical frustrations.

The downside is you’ll eventually tire of the tracks requiring you to pick up new versions so it stays fresh. With a game like EA Sports Active for example the music is generic, however you can turn it off and play your own MP3s with another device. Granted this is an apples to oranges comparison but it’s an integral factor to consider when assessing replay value of the Just Dance series.

Another advantage Just Dance offers over fitness games is its fun to play with a group. While exercise carries connotation of work and strain with it, dancing does not. Your friends might even be the ones who will con you into getting off your rump and popping it in.

Overall you’d be crazy not to try it even if you’re not big on bubblegum pop. Think of it as a guilty pleasure or claim it’s “for the kids” if need be.

When you make purchases through links on infospike.net, we may earn an affiliate commission.